The power of the past

… flying high over a campfire

love history and have long suspected that others would too if presented well. That was confirmed magically several years ago in a provincial park beside Lake Winnipeg. 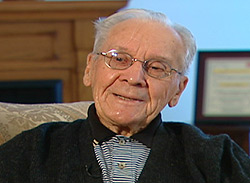 I organized an annual camping trip for inner city boys and had invited a slow-talking, octogenarian [Jaring Timmerman – pictured] to speak about his life. As a couple of dozen hard-scrabble kids tumbled into the fire light after a day of wild play, I wondered if these boys, many fatherless, would be able to sit still and listen to a soft spoken grandfather.

Without prompting, the old man explained what it was like to be a tail gunner over Europe in World War II. His story ranged from the texture of the sheepskin he sat on in the unheated plane to the names of his friends who had died. He spoke of fear and joy, of love and loss.

For an hour the only sound around the fire apart from the soft cadence of memory and living history was the crackle of burning wood and the faint snapping of imaginations kindled in new ways.